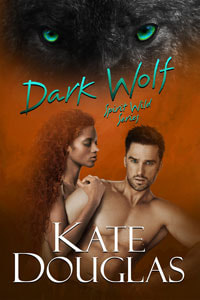 Kate's Pack readers--can you take a look at this and let me know if you find any errors? This is going at the front of the Dark Wolf eBoook. And while you're at it, check out the new cover! This book comes out July 10.

At the dawn of the twenty-first century, the man who would one day lead the Chanku Nation discovered he was one of a lost people who possessed a genetic heritage that had lain dormant for eons.

Anton Cheval, a world-renowned magician, walked away from a successful career on stage in order to pursue a deeper understanding of magic. His search led him to Tibet, where he learned secrets far beyond the scope of even his most fertile imagination.

How could he possibly have known he was not entirely human? Instead he was part of a forgotten species dependent on the nutrients in certain grasses native to Tibet—grasses that enabled a genetic birthright his people had lost over the ages. He was Chanku, a shapeshifter with abilities heretofore unknown by a modern society—abilities enabled once he ingested enough of the nutrients in the grasses. He discovered that his kind had been lost by their negligent goddess. Tasked with watching over them, she had  somehow misplaced her Chanku—had lost them entirely, eons before.

Cheval made it his mission to find others like him, people unaware of their Chanku heritage who, once they had those nutrients, could develop the ability to shapeshift, to speak telepathically, and to live lives so long as to be almost immortal.

One by one, he found them, sharing the grasses, helping each new member understand the amazing changes in his or her life as the world exploded in sensation and their bodies—and lives—were forever changed. Among the many changes was the awakening libido, a need to connect sexually with others that was as strong as the need for food and air.

A people of intelligence with an inborn sense of integrity and honor, most had been misfits in the human world without realizing they weren’t actually human. Drawn by their unique abilities and powerful sexual need, they came together as pack, learning as their numbers grew, just who and what they were.

At first they kept their amazing abilities secret, afraid they would be hunted as animals if the world knew of them. Then, a mere decade into the pack’s secretive existence, one of their members saved the lives of children visiting the American White House. Shifting from Secret Service agent to wolf in front of television news cameras from all over the world, he grabbed a backpack loaded with explosives and carried it away from the crowd seconds before it exploded. Badly injured, he survived, and his act of heroism and the president’s praise and support eased the pack’s introduction into the modern world.

Now, over twenty-five years later, the Chanku Nation is a powerful economic force around the world, but xenophobia has reared its ugly head. More and more human citizens are speaking out against the long-lived shapeshifters, led by the most dangerous man of all—Aldo Xenakis is a dark wizard with a cult-like following, and a plan. He wants what the Chanku have, primarily, their immortality.

Lily is special even among Chanku. The first offspring born of two Chanku shifters, she had absorbed the nutrients in the womb and while nursing at her mother’s breast. Lily is blessed with both beauty and brains—and magical ability that surpasses that of her father. As CEO of Cheval International and the daughter of Anton Cheval—über alpha of the Chanku Nation—Lily Cheval has chosen to live alone in San Francisco, headquarters of the pack’s business interests. Strong and independent, she is resigned to life without a mate. She has yet to meet any Chanku male who is at least her equal in both magic and intelligence.

Then, a series of murders near both the pack compound in Montana and their offices in the  San Francisco Bay Area leave her wary and worried for her fellow Chanku. The bodies of human women are turning up—women raped by men, but killed by wolves.

Aldo Xenakis, a charismatic cult leader, is blaming the Chanku, inciting fear among citizens throughout the west. When Lily meets Aldo’s son, Sebastian, their connection is intense and immediate, yet tempered by the darkness she senses in him—he is a powerful wizard who uses magic to shift into wolf form, but is he also the killer?

Driven by passion, Sebastian and Lily come together during a night of sensual ecstasy, a joining that leaves Lily shaken but utterly alive. She wants Sebastian, but the question is one that must be answered: Could Sebastian be the man she’s been waiting for, or is he her worst enemy?